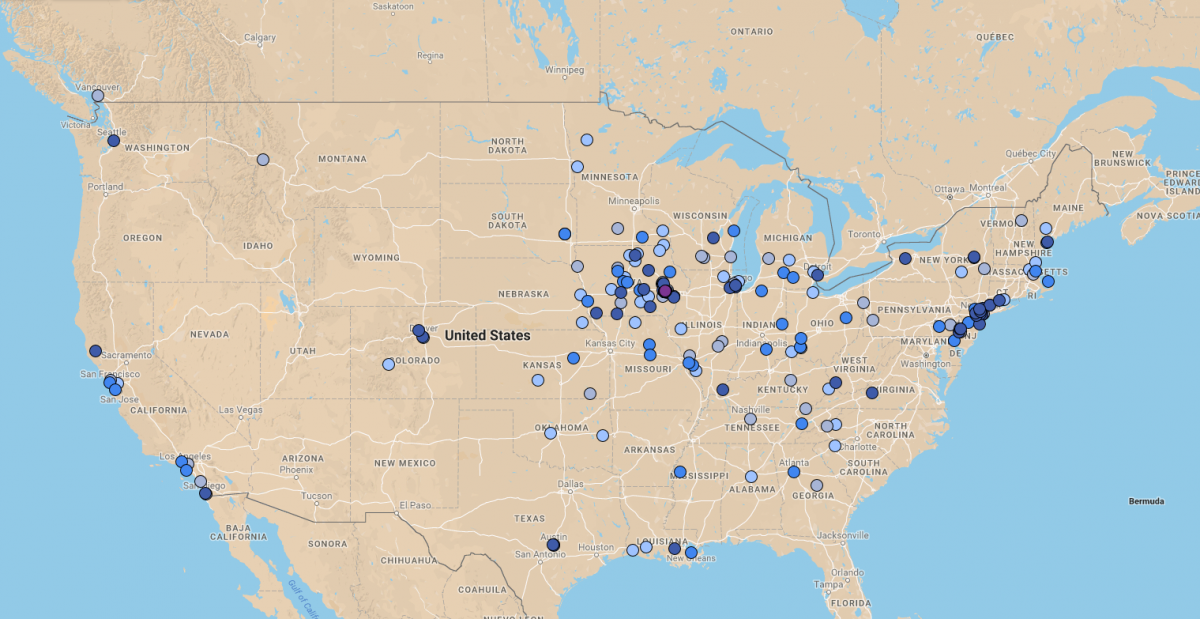 Here is a link to the Google map I’ll be discussing for this second post on Geographic information assembled by the Program Era Project. Again, feel free to click and explore. Layer toggles are activated on the left bar.  In order to ensure privacy, all names have been removed from the assembled records. This map was made possible by the efforts of University of Iowa students Emma Husar and Abby Sevcik, who were instrumental in collecting and organizing the data presented here.

In our earlier post, “Geography and Creative Writing with Google Maps,” the Program Era Project provided a sample visualization of some of the geographical data the Project had collected in its ongoing effort to document and better understand the expansion of the Creative Writing programs at universities across the United States during the second half of the 20th century. The visualization, made using Google Maps, employed data assembled from resources found in the University of Iowa Special Collections Library and the University Archives to illustrate the migration of creative writers to and from Iowa City and the Iowa Writers’ Workshop. Charting the hometowns of prominent Workshop-affiliated writers and the locations of creative writing programs founded by, directed by, or employing Workshop-affiliated writers, the map helped demonstrate how a single institution such as the Workshop could have connections to writing programs across the nation. It also showed how a single program could draw writers from a wide variety of locations both inside and outside of the United States.

By using the Google Maps filters feature to separate historic time frames, it was possible, within the previous Google Maps visualization, to detect what regions of the United States were common origin points for prominent Workshop writers. The previous visualization suggested that the Northeast, Midwest, and South had been home to a number of Workshop writers. Meanwhile, the map simultaneously suggested a scarcity of writers from states such as Montana, the Dakotas, Idaho, and Wyoming (though, again, that may simply be a feature of that intentionally limited data set).

At the end of the previous post, I had written that the Program Era Project’s Nikki White had been working with a different collection of University of Iowa archival records to bring together a larger set of geographic data about the Workshop and its graduates. This post will highlight a new Google Maps visualization based on that data. This new visualization documents the hometowns of over 200 University of Iowa graduate students connected to the Iowa Writers’ Workshop, graduates who received advanced degrees at Iowa between 1938 and 1960 (this distinction will be clarified in a moment). In order to maintain the privacy of the graduates, we have stripped the records of all names. The aim of the data visualization is to explore broad demographic trends, not chart any single author’s professional itinerary.

Illustrating, once again, the wealth of historical records the Program Era Project has been able to access in the University Iowa’s Libraries Special Collections and University Archives, the data for this visualization was assembled by examining graduation programs and pamphlets distributed at University of Iowa commencement ceremonies between 1938 and 1960. In these materials, students were allowed to list their hometowns, and, so, when this information was collected, a data set could be born. For their efforts in undertaking the sizable task of assembling and organizing these hometown records, the Program Era Project owes significant thanks to University of Iowa Students Emma Husar and Abby Sevcik, who were crucial in stewarding this information from the archive to the database.

While this post is on the topic of organizing and assembling data, it’s important to note that this current visualization charts the hometowns of “over 200 University of Iowa graduate students who attended the Iowa Writer’s Workshop,” not “Iowa Writer’s Workshop MFA graduates.” There are a number of reasons to use this broader language and I will outline some of them in order illustrate the challenges the Program Era Project faces in collecting and organizing archival records. First of all, this broader language helps account for the variety of degrees Workshop students earned at Iowa in the early days of the program, as well as the variety of ways those degrees were earned.  Workshop affiliated writers and scholars were receiving PhDs as well as MAs and, later, MFAs. Critical studies as well as creative works were turned in to satisfy completion requirements.

Additionally, as Nikki mentioned in her post on the Program Era Project blog, “Building the Program Era Project Database,” another challenge faced in refining datasets is the shifting administrative relationship between the Writers’ Workshop and the English Department at Iowa. Until the 1990’s English and Creative Writing remained, to varying degrees, institutionally intertwined, the two units only fully separating after the 1992 study mentioned in the previous post. Because of the closeness between these two units, deciphering the precise institutional position of an individual can require frequent cross referencing between resources and archives.

One other particularly interesting and unusual feature of the data is the significant number of graduates listing Iowa City itself as their hometown. This is both something of an anomaly and a specific issue the Program Era Project is addressing as it builds its database. Throughout the period covered by the map there are a significant number of graduates listing Iowa City as home, a number that seems both out of place and comparable to much larger, more populous areas. Looking at the data in more detail, with names still connected to data points, shows how this anomaly likely occurred. For instance, in the dataset poet W.D. Snodgrass listed his hometown as Iowa City. However, Snodgrass’s biographical information makes it clear this is not the case. Iowa City was not the poet’s hometown and he only lived in Iowa City for a relatively small portion of his life. While, on the one hand, this represents a statistical blip, it also points to a potential phenomenon, one of writers, at least on an official record, “adopting” the home of the workshop as home for themselves. That said, because of this unique coincidence of bookkeeping, and because of some of the other challenges I’ve mentioned above, the visualization presented here should be seen as a look at broad contours in early demographic trends with Workshop-affiliated writers. It is still an evolving data set that will be further shaped by ongoing research. 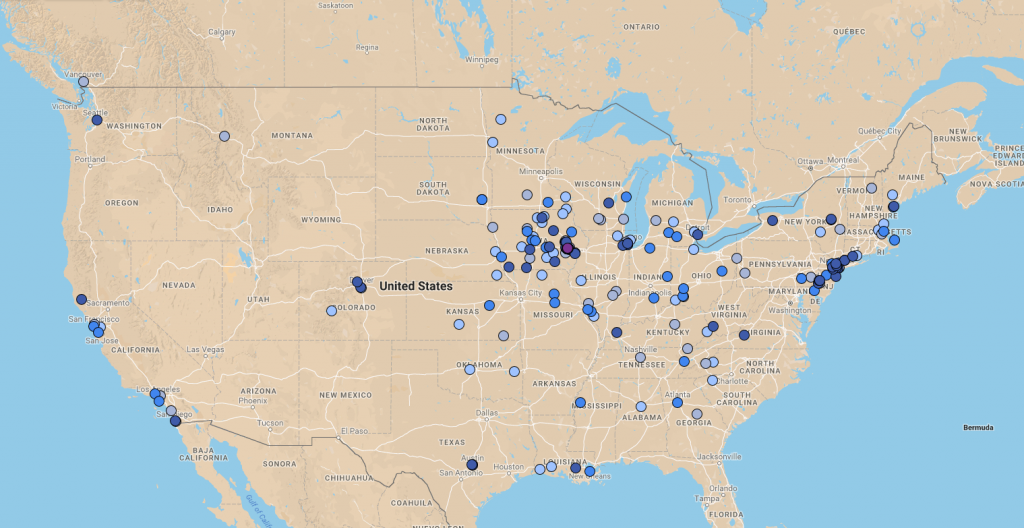 Methods, provisions, and historical anomalies covered, let’s look at the maps. When compared to the previous visualization, what becomes quickly apparent is the much larger number of individuals included. Because of this higher density of information, this map lends itself much better to looking at aggregate changes as opposed to examining individual points. That isn’t to say, however, it can’t also be fun to speculate who points might be, points like a sole 1947 graduate from Milledgeville, GA. When the map is zoomed closer on particular cities and regions, a clearer pictures emerges of the numbers of graduates associated with a location. Moreover, like the previous Google Maps visualization, the most interesting perspectives emerge by toggling layers of the map on and off, as these layers group the data points by time increments. By toggling layers, the chronology of the Workshop’s growth, its expansion into an international institution, its accumulation of graduates from specific cities and regions, can be seen in greater detail. 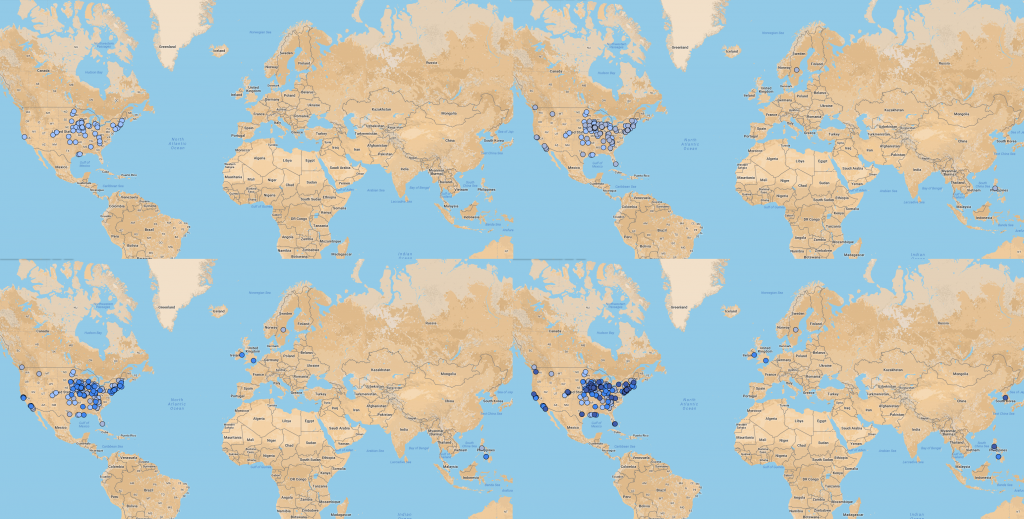 These images show overall growth in the number of Workshop graduates in the United States between 1938 and 1960, as well as the Workshop’s eventual turn towards drawing writers from outside the United States, graduates from England, the Philippines, and South Korea all appearing on the map. 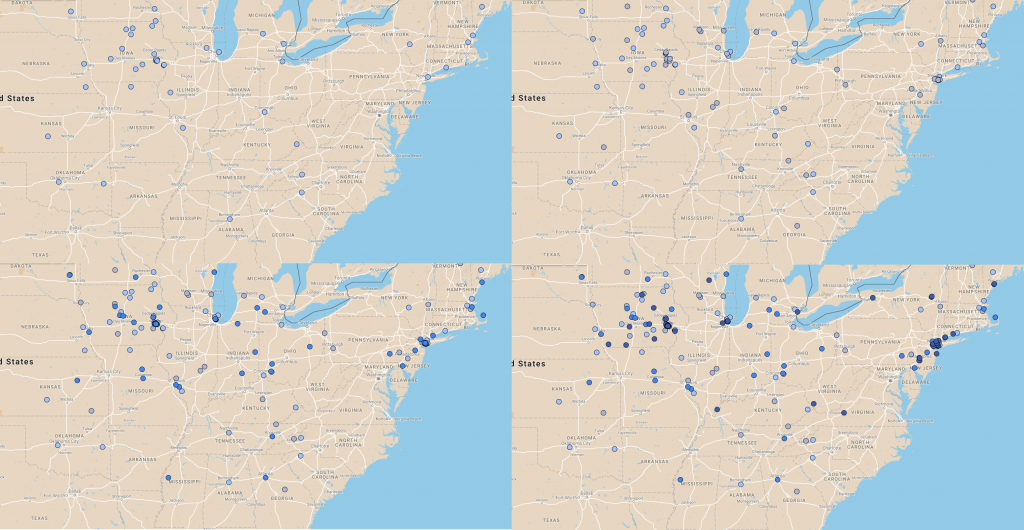 Here are a set of images demonstrating the incremental growth of graduate hometowns in Midwest and East coast of the United States, the regions which a large portion of the early graduates listed as their home. 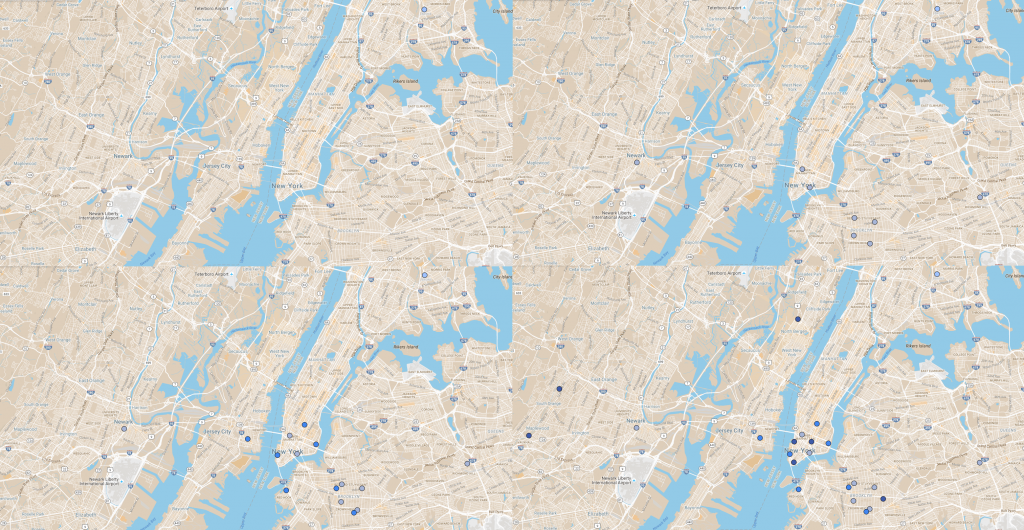 Lastly, we can see how toggling on and off layers can help illustrate the proliferation of graduates listing a single metropolitan area as their hometown, in this case, New York City and its surrounding areas. While only one writer in our dataset listed the New York City area as home in 1946, as the layers increase, the number of graduates also increases sharply, indicating an ongoing growth of a relationship between the two cities.

So, while our previous map allowed viewers to get a sense of the migration of specific individuals into the Iowa Writer’s Workshop and out to positions of institutional significance at newly-forming creative writing programs across the country, this visualization offers the chance to get a better large-scale sense of what places writers were leaving to arrive at the Iowa Writer’s Workshop. This visualization also documents the Workshop’s expansion into an institution that drew international attention and it shows how the number of writers coming to Iowa City from American metropolitan centers would grow throughout the second half of the twentieth century. In short, by linking the Program Era Project’s data up with Google Maps we have a chance to show off another example of how The Program Era Project is assembling the information needed to chart patterns, and take a macro look at statistical and geographic trends in the history of Creative Writing.