– The following first appeared on the NewReadia blog 05/24/16. It has been reposted here to document some of the Program Era Project’s ongoing experimentation with visualizing the data it has collected. – NMK

Here is a link to the the Google map I’ll be discussing throughout this post, “Workshop-Affiliated Directors and Founders of Creative Writing Programs (1976, 1992).”

Since the last post on New Readia, the team behind Mapping the Program Era—now renamed the Program Era Project—has continued its work on collecting historical and institutional records to chart the evolution of both the Iowa Writer’s Workshop and the literary phenomenon of creative writing programs during the second half of the 20th century.

As I mentioned in my last post, Mark McGurl opens The Program Era: Postwar Fiction and the Rise of Creative Writing, remarking, “the rise of the creative writing program stands as the most important event in postwar American literary history” and he emphasizes the need to document the growth of the creative writing enterprise (ix). Earlier this month, the Program Era Project team—along with new team member John J. Witte of Iowa’s Department of Communication Studies—had the chance to go to Stanford University and meet with Professor McGurl, Professors Mark Algee-Hewitt and Franco Moretti , and other members of Stanford University’s Literary Lab. There, we were able to share some of the work we’ve done on the Program Era Project and to bounce ideas off our gracious hosts regarding how the Program Era Project might pursue the objective McGurl lays out in his book.

Over the course of the summer, I’ll be sharing online some of the work we presented and the experiments we’ve conducted with visualizing the data we’ve collected. As I’ve mentioned before, the Program Era Project is interested, whenever possible, in using our data to create sample visualizations and proof-of-concept work. We do this both because it helps the team get a sense of what types of research question our data can help answer, and, more importantly because it helps us see the potential the Program Era Project has to offer new perspectives on the literary phenomenon of creative writing.

For this post, I’ll be showing (more accurately, “providing access to”) a sample visualization put together using Google Maps, which presents geographic information about the migration of Workshop-affiliated writers to and from Iowa. It also allows users to see a collection of creative writing programs founded by Workshop writers and where Workshop-affiliated writers were serving as directors of other creative writing programs at two specific points in time: 1992 and approximately 1976.

The key information for this new visualization came, as is often the case with the Program Era Project, from resources available through the University of Iowa Special Collections Library and the University Archives. In this case, the document in question was a department self-study produced, in 1992, by the Writers’ Workshop for the College of Liberal Arts and Sciences. In the 1992 study, the Workshop reported to the University on its current size and overall growth. The self-study offered other information, including extensive lists of awards won by Workshop students and faculty, as well as one appendix, titled “Directors of Writing Programs with University of Iowa MFA’s,” which provided a list of Workshop-affiliated writers and the programs for which they were then serving as director. Interestingly, the study was produced as the Workshop was undertaking efforts to separate from The University of Iowa’s English department, becoming its own institutional entity.

Beyond its status as a fascinating historical document, the i 1992 study opened the opportunity for some new geographical visualization experiments and proof-of-concept work, particularly given that the Program Era Project had already collected an earlier list of Workshop-affiliated-writers who served as directors (or founders) of other creative programs, that list assembled by looking through information assembled by Stephen Wilbers for his 1976 English dissertation at Iowa, a work which went on to be The Iowa Writers’ Workshop. Because we had these two collections of data, assembled at two specific points in time, we could see how the number of creative writing programs with Workshop-affiliated directors or founders had grown or changed over the span of 16 years. We could also get a greater sense of the ongoing movement of Workshop-affiliated writers into and between creative writing programs across the country. 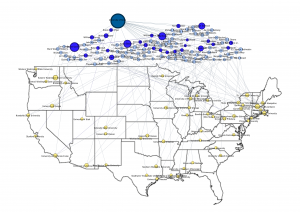 For my last post, some network maps made in Gephi provided the basis of a rough mockup visualization of the spread of the Workshop-affiliated writers across the US. While it gives a sense of how and where Workshop-trained writers had moved on to teach by the time of Wilbers’ 1976 survey, the image could benefit from better legibility and it doesn’t account for changes over time. So, for this experiment in data visualization, we turned to Google Maps.

The new Google map experiment offers a sample of some of the geographical information about the history of creative writing we are working to document in the Program Era Project. By taking advantage of different layers of information we can have on one Google Map, we can both account for (slight) variations in time and allow for different types of information to be toggled on and off. The static image above illustrates a number of things tracked by the map. First, the light blue points are schools that listed Workshop-affiliated writers as directors of their creative writing programs in Wilbers survey. The dark blue points show schools listed as having Iowa MFAs as directors in the 1992 self-study. Green markers are the locations of creative writing programs that reported, for the Wilbers survey, they were founded by Workshop writers. Clicking on a blue or green point gives the name of the school and the Workshop writer(s) listed as director or founder. 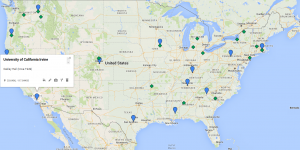 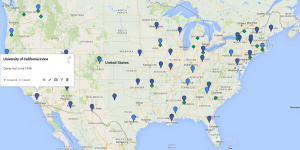 Toggling on and off layers, such the 1976 and 1992 director’s lists, allows for some changes over time to be seen. By switching between 1976 only and both 1992 and 1976, users can see, for instance, the new schools where Workshop-affiliated writers became directors. The map also shows, if Workshop writers stayed at a particular school. Oakley Hall, for instance, was listed as the director of the creative writing program at the University of California, Irvine both in Wilbers survey and in 1992. Moreover, with both layers on, the overall growth of schools where Workshop writers have been employed in positions of institutional significance is also illustrated.

The Program Era Project is also interested in where Workshop writers came from, not just where they went after the Workshop. A history of the Workshop (or creative writing) would be incomplete without considering what regional backgrounds have converged in creative writing communities. So, in cases where information about Workshop author hometowns was available via author biographies, that hometown information was added to this map. The information, like the school information, is separated by the time frames of 1992 and 1976.

Here, the hometowns of 1992 directors are in dark red and 1976 directors/founders are in light red. Admittedly, the hometown data is less complete than the school information. In a later blog post, I will show some of the other approaches team member Nikki White has taken towards mapping hometown geographic data. However, for now, the hometown information on the map still gives a small sense of some of the places people were traveling from to arrive at Iowa City. The East coast, South and Midwest all have a number of Workshop writers. Both in terms of schools and hometowns, the map also bears a noticeable gap in states like Montana, the Dakotas, Idaho, and Wyoming, though this may just be an unusual feature of this data.

This map, as is the case with the previous data visualizations, covers very specific historical snapshots and uses an intentionally limited collection of information. It is, fundamentally, a proof-of-concept. However, I hope the map helps illustrate some of the information the Program Era Project hopes to make available in its efforts to document the history of creative writing. I encourage you to play around with the map and we hope it gives you a sense of our aim to provide interactive digital research tools for the scholar and the curious alike, as well as the potential the Program Era Project has to offer new perspectives on the literary history of the 20th century.