The first website was a stark but excellent foundation for what has since become a useful teaching tool and an incubator for collaborative community projects and digital scholarship. 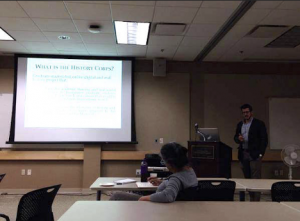 When I requested an assignment to the HSC in the spring of 2013, I didn’t really know what the project was or how it worked.  I only knew that I had an interest in public history, and that HSC was the only formal thing our department offered. As Paul Mokrzycki Renfro, my HSC colleague that semester, and I began to delve into the project, we realized an opportunity to make it a venue for public and digital projects of all kinds.

We sought advice from the Pentacrest Museums, the Iowa City Public Library, the Obermann Center for Advanced Studies, and the Digital Studio for the Public Arts and Humanities. All gave tremendous and enthusiastic support, and the Studio helped us learn the fundamentals of WordPress, a popular web blogging platform, and offered us space on their newly-minted server.

We next decided to move the project to a WordPress page so we could add photographs and text to accompany oral interviews as needed. We also changed the name to “History Corps,” because a couple of our early partners said it was a bit of a mouthful and thought it sounded too much like we were affiliated with the “Story Corps,” a New York-based nonprofit with an oral history program that plays frequently on NPR.

With that, History Corps as we now know it was born. I stayed on board and tried to nurture the project for more than two years. In that time, we recruited several excellent graduate students and an energetic faculty mentor. Together, we have collaborated with graduate and undergraduate classes and migrated to a new—and even more dynamic—web platform called Omeka. A few current graduate students even say they applied to Iowa after finding History Corps online. And History Corps is now engaged in a number of collaborative partnerships on long-term projects with communities across Iowa and the Midwest, most recently a digital mapping project with the Ioway and Meskwaki Nations.

Looking back, I don’t know if I ever really thought we’d make it this far. But I’m glad we did and look forward to the future of digital and public history at UI.

Eric Zimmer is a doctoral candidate in the Department of History at the University of Iowa. After college, he spent a year as a journalist, researcher, and public historian. He also spent six months working under the tribal liaison in the Office of U.S. Senator Tim Johnson in western South Dakota. Eric’s historical interests focus on the twentieth century United States, especially relating to Native Americans, politics, and federal/state Indian policy. His research examines the relationship between land ownership, sovereignty, and self-governance among the Meskwaki Tribe here in Iowa. Deeply interested in public history, Eric joined the History Corps during the Spring semester, 2013.