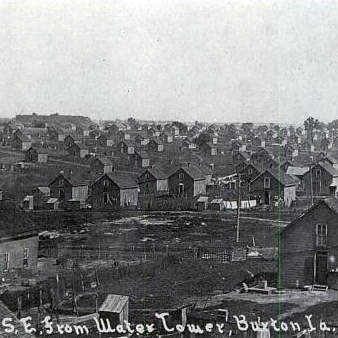 In the early 1880s, recruitment of African American miners to Mahaska County led to the development of a community that would become a thriving settlement, home to black miners, merchants, and professionals. The coal camp of Muchakinock, Iowa, which flourished for about 20 year s during the late nineteenth century, was an unusual community for that time in the state’s history. According to Stek:

It is not clear whether the workers recruited to go to Muchakinock
were informed that there was a strike in progress[…] it is possible, however, that the inexperienced
laborers recruited to work at Muchakinock were unaware of the potentially dangerous situation they would be facing. The decision to move north into a potentially violent atmosphere was balanced against the conditions they faced if they decided to stay in a community where
racial enmity was a fact of daily life and where unskilled workers
had little economic opportunity.

Read more about Muchakinock, and the influential leaders who helped create the prosperous community.  Transplanted miners and their families helped to develop a strong and vibrant community in Iowa.  Muchakinock was relatively free of racial violence and segregation and that included independent African American merchants as well as doctors, lawyers, journalists, teachers, and other professionals.