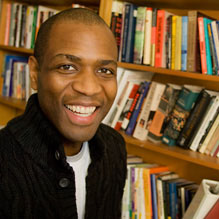 Dr. Vershawn Young responds to an article in the New York Times by Stanley Fish which asserts there only one way to speak and write to get ahead in the world.

But dont nobody’s language, dialect, or style make them “vulnerable to prejudice.” It’s ATTITUDES. It be the way folks with some power perceive other people’s language. Like the way some view, say, black English when used in school or at work. Black English dont make it own-self oppressed. It be negative views about other people usin they own language, like what Fish expressed in his NYT blog, that make it so.

Read more about the professor of rhetoric, Dr. Vershawn Young’s thoughts on code meshing, and “Black English” oppression. “Code meshing be everywhere. It be used by all types of people. It allow writers and speakers to bridge multiple codes and modes of expression that Fish say disparate and unmixable. The metaphorical language tool box be expandin, baby.  Plus code meshing benefit everybody.”